Today, I was in the Ronald Reagan Building, where Border Patrol headquarters is located, when I received an email from Chief Ortiz asking me to call him.  I called him and asked if it would be convenient to meet in his office since I was there.  He agreed.  I went to his office and we spoke for approximately 20 minutes.

Chief Ortiz told me that he had watched a recent Medal of Honor presentation where several military members had received their recognition from their service during the Vietnam War.  He shared that seeing that presentation made him realize that he had made a mistake concerning canceling the awards described in the email below.  Further, he stated that he instructed his staff to revive all of the nominations so that they may be considered and recognized.

I commend him for having the strength to change his decision, and for providing an example of valuing the workforce that should be emulated in the sectors.

​Below is the unedited email I sent.
Subject: Congratulations - Please do better for the workforce

Congratulations on being selected as the U.S. Border Patrol’s 25th Chief.  I hope you do better for the workforce during your tenure as Chief of the Border Patrol than you did as Deputy Chief.

As Deputy Chief, you directed your subordinates, without reason or explanation, to cancel and reject U.S. Border Patrol Honorary Award nominations for 370 employees, 50 of which were for acts of heroism/valor.  Your decision perpetuated the organizational attitude toward its employees which has been reflected in the USBP’s poor Federal Employee Viewpoint Survey (FEVS) scores for years. It sets a negative example by which other USBP leaders will follow.  Employee recognition isn’t important.  Employees do not perform worthy acts.

By April 2020, before you became Deputy Chief, over 300 USBP Honorary Awards had been approved and presented to recognize qualifying past actions, as defined in the approved USBP Honorary Awards and Recognitions IOP.  All of the awards corrected past wrongs, were well received and were driving a positive change in organizational culture that would benefit the workforce and the mission.  However, without reason or explanation, you placed an arbitrary limitation by which actions occurring over two years in the past could not be recognized.  As a result, worthy recognitions for the past acts of 370 employees (over 50 for heroism) that were pending final approval were rejected without any reason given.  The nominations had been written, submitted, and you rejected all of them without reason. The awards were purchased and as the USBP Awards Coordinator, I was the primary person that would have been tasked to process the recognitions of which I would have been happy and privileged to do.

​In October 2020, I briefed you on the USBP Honorary Awards system.  At the end of the brief, I reminded you of your rejection of the 370 nominations and asked you to allow the awards to be approved, that the actions were worthy, the awards were purchased and that it would be my privilege to process them.

I reminded you of a group of five BORTAC agents who were deployed to New Orleans for Katrina in 2005 and recounted their action…. ​ 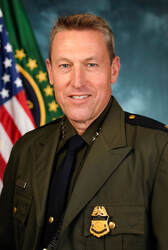 Official Photo of Chief Rodney Scott Without USBP Honorary Awards
I paneled that action before an experienced group of headquarters employees.  The panel unanimously recommend that the two agents that had gone to the second floor be recognized, individually, with the Newton-Azrak Award for performing beyond the call of duty while facing grave danger.  The panel considered the other three agents as a group and recommended that they be recognized with the USBP Commendation Award with a “V” device for performing beyond the call of duty while facing great danger.  Ignoring the panel’s recommendations you rejected the nominations.  However, you provided that the actions could be considered based on an approved waiver submitted by a Chief Patrol Agent.  Shortly thereafter, Chief Sullivan submitted the waiver and you disapproved that CPA's waiver request.

Because of your disapprovals, the names of those agents will never be known.  Their actions will not be remembered.  They will never receive recognition from the USBP for their conspicuous and extraordinary heroism at the risk of their lives, because of your decision.  They are merely five of the 370...

There are reasons that the USBP is consistently in the bottom 10% of the FEVS and I present that the negative approach toward the workforce describe above is a contributing factor. Admittedly, a robust recognition system will not correct low morale within the workforce.  However, it would have several orders of effect that would drive a positive change in organizational culture.

Change, even beneficial change, doesn't just happen within an organization.  Those people in leadership positions must drive and support it.  My first experience with Chief Scott concerning USBP Honorary Awards did not go well.  Being the USBP Awards Coordinator,  I knew that Chief Scott was the recipient of the USBP Commendation Award and the 75th Anniversary Medal.  I knew when he was going to take his official photograph and I staged myself outside his office with his two ribbons mounted on a 2-ribbon bar.  I wanted him to put them on his Ike jacket for the photo.  When he came out of his office, I gave him the ribbons and volunteered to put them on his jacket.  He asked why he would wear them.  I told him, because:
​He looked at the photos of the past Chiefs of the Border Patrol and saw only Gus De La Viña wearing a 75th Anniversary ribbon and said, "I'm not going to be the first."  He then said, words to the effect of, "Maybe people who used to be in the military like these things..."

Awards are primarily for the recipient.  However, it is a primary manner in which the USBP demonstrates appreciation to the workforce for upholding the organizational values that are codified in the Honorary Awards IOP.  When a recipient fails to wear awards or receive them in a public setting, the following opportunities are missed:
Those missed opportunities are magnified when the recipient is in a leadership role.  It is a missed opportunity to improve employee engagement and morale.

Respectfully,
Clifford Gill
Retired Assistant Chief
The pictures below are of the structure fire where the BORTAC agents rescued the child, at significant personal risk and beyond the call of duty.  These photos were not included in the Open Email but were part of the nomination packet and were considered by the awards panel.
My purpose of sending the email was to cast a light on the actions and inactions taken by USBP leadership, specifically those of Chief Ortiz and Chief Scott.  I also thought it important to let Chief Sullivan know what had transpired and why the heroes for which he advocated will neither be known, remembered, nor recognized by the USBP.

Of course, neither Chief Ortiz nor Chief Scott responded to or acknowledged receipt of the email.

I never had any illusions that Chief Ortiz would allow these 370 employees to receive recognition.  I wanted people to know what happened and hoped that this email will put future leaders on notice.  If you don't do well for the workforce, someone might cast a light on it as in the email above. 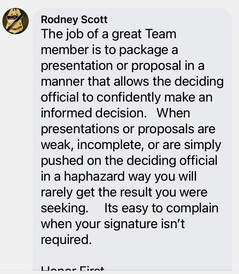 It would appear that Chief Scott, on his last day of federal employment, posted the response to the right on Facebook in a thread about this page.

In response to Chief Scott's Facebook post, the documents that authorized USBP Honorary Awards and their wear had been in place for quite some time:
Chief Scott and Chief Ortiz were being asked and advised to abide by internal documents.  They were not being presented something new in a weak, incomplete or haphazard way.  Both Chief Scott and Chief Ortiz were aware of the aforementioned documents in that they were on the distribution list, receiving them in the first wave of dissemination as well as being responsible for their implementation in their areas of responsibility.
It should be noted that Chief Scott had a vision to create an op-ed of "Living Honor First".  I was in the meeting when he directed it to be written. I was tasked to author the draft (see this document and its properties).  I submitted the draft and it was edited by Executive Director Scott Hoover.  The document was sent to the entire USBP workforce in June 2020, after the events in the email above.
​In the op-ed, there is a portion that gives examples of falling short of living Honor First​.  Specifically, the portion is, "... failing to abide by stated values".  As highlighted in the email, USBP values are codified in the Honorary Awards IOP.  The USBP fell short of living Honor First​ and abiding by the stated values codified in the USBP Honorary Awards IOP by rejecting the worthy recognition of 370 employees before the op-ed was disseminated.  Unfortunately, that failing continues as you read this.

It is disappointing that Chief Scott's Facebook post is his explanation why his Deputy prevented 370 worthy people from being recognized by the USBP under an existing system and his reason for not supporting the Border Patrol's awards system by wearing those of which he was presented.  I would have hoped that Chief Scott's Facebook response to the open email would have included an acknowledgment that he and Chief Ortiz could have done better for the workforce.
See the links below for an overview of the USBP Honorary Awards system and examples of USBP employees being recognized for upholding Honor First.
Please send questions or comments to me at cliff@honorfirst.com.
All HonorFirst.com web pages and documents are copyright 2017 - 2021 by Ray Harris.  All rights reserved.
DISCLAIMER:
​HonorFirst.com is in no way affiliated with the Department of Homeland Security,
Customs and Border Protection, or the US Border Patrol.
The US Border Patrol is an equal opportunity employer.