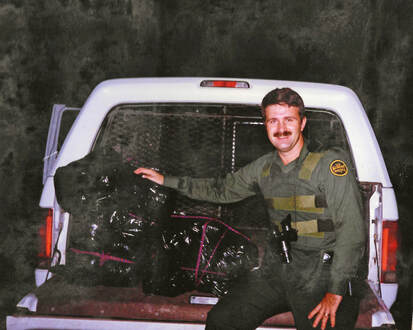 ​It was a warm night in December 1996 and Ed. S and I were assigned as partners for the midnight shift in Brownsville, Texas.  I was driving and it had been pretty quiet most of the night.  Ed and I mostly talked about computers, the holidays, and the recent surge in dope seizures at the station.

About 0230 hrs a sensor when off on the Rio Grande near Calle Flor de Mayo (Mayflower Street) about ten miles west of the Brownsville POE.  We responded along with the teams of Oscar P. & Frank S., Reyes D. & Brent C., and Larry I. and his K-9 Meko.  We set up the brushline west of the other units.  I was using night vision goggles and saw them apprehend three guys.  The sensor had over fifty hits, so there should have been more traffic than that.  While watching the area I saw two more guys sneak by, but neither of the units caught them.  Everybody cleared the area then.

I asked Ed if he wanted to check the sensor and we agreed to drive out there.  We parked our vehicle along the brushline about sixty yards from the river and walked the trail in.  The sensor started to go off again, so we started to move more cautiously.  When we were about fifty feet away, using the NVG’s I saw some people hiding in a cluster of trees near the area of the sensor.   They must have seen us, because they hightailed it back to the river.  Ed and I approached the area they were in and saw the people heading down toward the bank of the river.  Several were already in the water by the time we got to the small clearing behind the trees.  We searched the area and found several black garbage bags which still had water in them.  The individuals were all up on the Mexican side trying to hide in the brush and watching us.  Ed and I searched for awhile, but couldn’t find anything.  During the whole time we were searching, the subjects stayed on the other side attempting to hide.  Both of us thought this was unusual, so we decided to pretend that we were leaving the area.  We both lit up the area with our flashlights and walked back up the trail.

Once out of sight, we laid in next to some cane about twenty feet away from the cluster of trees we initially saw the subjects at.  About ten minutes later, looking through the NVG’s I saw six subjects get up and five of them had black bundles on their backs.  I gave the NVG’s to Ed and we both agreed that they would soon be bringing dope over.

About another ten minutes later, one of the subjects went down to the river and stripped.  He came up the bank naked and walked about ten feet from where we were hiding.  He was very cautious looking around and stopped quite often.  We were laying in the brush and trying to be quiet, when all of a sudden, my stomach started to growl.  I thought for sure that the guide heard it, because he momentarily stopped and looked around mere feet from me, but he continued past us.  He went into the cluster of trees and looked out and then went up the road.  Satisfied he came back, stopping quite often to look around and listen.  He went back to the other side and conferred with the other subjects.  All of them went down to the riverbank.  The “guide” crossed again and this time got dressed.  He went back to the trees and looked around.  He then went back to the top of the riverbank and signaled the others to cross.

We radioed in,whispering that we had a 10-46 (drug smuggling) in progress and told the other units to stand by.  At this time, we could hear bundles hitting the water and each of the subjects came up the bank and got dressed.  Once everyone was dressed and had put their bundles on their backs, the guide went back up to the trees.  After signaling, each mule moved to the trees one at a time.  Ed and I watched this through the NVG’s and agreed to jump them once they were on the road on the other side of the trees.  This would box them in-between us and the other agents.

The guide went out to the road as the others huddled in the trees.  The guide must have seen something that spooked him, so he started running and the mules all started heading back for the river.  Ed and I jumped up from our spot and yelled “Parese Migra!” and several of the mules dropped their bundles but kept running, angling away from us.  A couple even jumped off the bank dropping about fifteen feet before hitting the water.   We both ran after them in the thick grass.  At about this time Oscar, Reyes, and Frank came over into the clearing and started trying to help us look for the subjects and the contraband.  We ended up finding three bundles, when Larry came over with his K-9 to assist in the search.  Meko just jumped over the bundles that we found and didn’t alert on anything.  Frank went down to the river’s edge, but couldn’t find anything.  I brought two bundles over the hump by the road where I saw Brent standing and looking around.  Since he wasn’t helping with the search I dropped the bundles at his feet and told him to watch them, which he happily agreed to.

We saw five of the subjects on the Mexican side walking away and two appeared to be carrying bundles.  The guide took off on the U.S. but nobody caught him.  Ed and I transported the bundles back to Brownsville station where we found that they contained seven individually wrapped bundles of marijuana.  The total weight was 96 lbs valued at $76,800.  A fourth bundle was found later that morning by the day shift.  It was floating in the river next to where Frank was searching.  It contained an additional 32 lbs of marijuana valued at $25,000.