Help spread the word!
On August 8, 2002, the Border Patrol implemented its awards/medals program with the presentation of the first two medals. The Chief of the Border Patrol, Gustavo De La Viña, presented the medals during the Chief’s Conference, which was held at the Inn at Essex, Essex, Vermont in Swanton Sector.  Chief Patrol Agent Paul E. Conover, Swanton Sector, Swanton, Vermont was awarded the Purple Cross Medal for wounds he received in the line of duty during a gun battle with an armed murder suspect on August 17, 1982, near Redford, Texas. The Chief’s Commendation Medal (repurposed as the USBP Achievement Medal) was awarded to Charles C. Whitmire, Deputy Chief Patrol Agent, Border Patrol Academy, Charleston, South Carolina, for exceptionally meritorious achievement in connection with security operations during the 2002 Winter Olympics, Salt Lake City, Utah, while assigned as Commander of the Border Patrol Tactical Unit.

During the first week of August 2002, Deputy Chief Patrol Agent Beaumet was contacted and asked to design the certificates that would accompany the first two awards.  He completed them on August 5, 2002, just in time for them to be hand carried to the Chief’s Conference.

Although many awards were created and proposed, most were not implemented.  By 2004, the Chief’s Commendation Medal fell into disuse after only having been awarded once and only the Newton-Azrak Award and Purple Cross medal sets were presented to employees.
See the files below for the early proposals:
In 2018, U.S. Border Patrol (USBP) Headquarters realized the need to better recognize employees.  Assistant Chief Clifford Gill built on the foundation that began with Chief Beaumet and drafted the policy for the USBP Honorary Awards Program.  Under the program, the USBP 75th Anniversary Award was reauthorized for wear and two of the earlier awards designed by the U.S. Army Institute of Heraldry were repurposed for use. 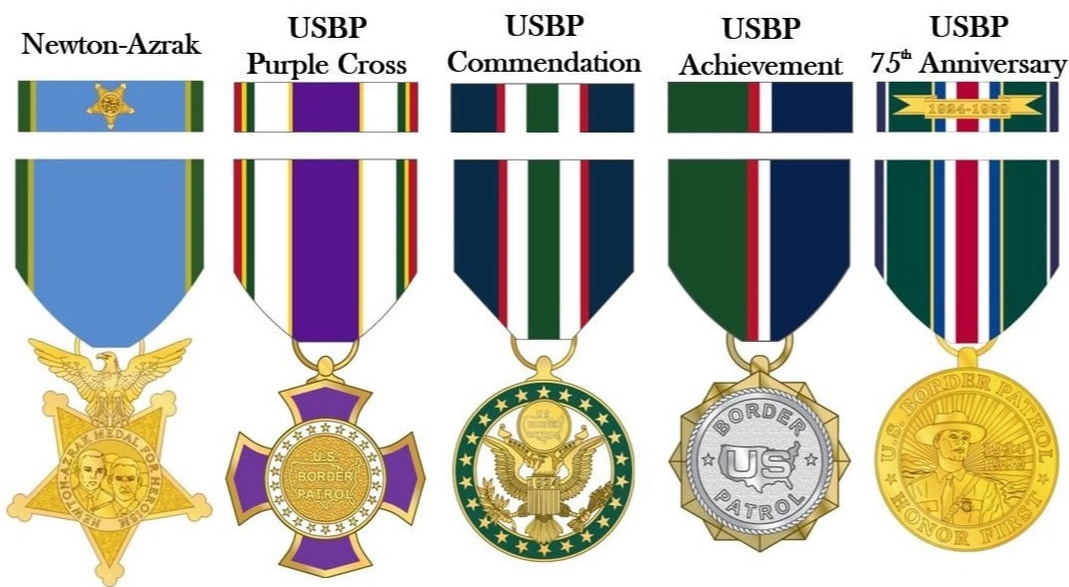 ​
Recognizing the achievements, service and heroism of employees is important.  It is critical for those in positions of leadership to value the workforce.  Awards are a fundamental manner for leaders to demonstrate appreciation to the workforce for upholding the organizational values.

Newton-Azrak Award graphic by the Army Institute of Heraldry (TIOH).  TIOH spec sheets for the award.

Criteria
May be awarded to any USBP employee who performs a conspicuous act of heroism:
​See this link for a history of the award and a list of its recipients.

USBP Purple Cross Medal
​This is the U.S. Border Patrol wound award. It may be used to commemorate injuries suffered in the scope of duty as well as injures due to assault related events.

Criteria
May be awarded to any employee who, while in the scope of duty, sustains: The nomination must convey the veracity of the claim.

Design
TIOH began with the obverse of the Great Seal of the United States. The field of 13 stars were replaced with the USBP patch. The USBP motto, "Honor First" was placed on the ribbon between the wings and the USBP patch. The USBP's year of inception, "1924", was placed on the shield. The 22 stars represent the 21 sectors that existed at the time the award was designed plus the USBP Academy.

Criteria
Awarded to an employee or a group for exceptional meritorious achievement or service. The acts or services must be accomplished or performed in a manner above that normally expected, and sufficient to distinguish the recipient(s) above those performing similar services, or Awards of the U.S. Border Patrol Commendation for acts of extraordinary heroism are distinguished with the addition of a “V” device affixed to the suspension ribbon and ribbon bar.

Criteria
Awarded to an employee or a group for meritorious achievement or service based on sustained performance or specific achievement of a superlative nature, and shall be of such merit as to warrant more recognition than is possible by non-traditional awards, but which is not significant enough to justify the U.S. Border Patrol Commendation Award, or Awards of the U.S. Border Patrol Achievement for acts of heroism are distinguished with the addition of a “V” device affixed to the suspension ribbon and ribbon bar.

Relationship of USBP Honorary Awards to other Recognitions

The USBP Honorary Awards are designed to displace non-traditional awards as the recognition item for lessor yet worthy achievements, service and heroism.  Further, the intent for USBP Achievement Award is for the decoration to be given generously, to be presented to approximately 10% of the workforce per year.

Actions recognized by the Newton-Azrak Award, Purple Cross Award and U.S. Border Patrol Commendation Medal are to be the primary source of USBP nominees for all exterior awards:


Most exterior awards systems recognize less than 10% of the nominations (90% failure to recognize).  By recognizing a Border Patrol employee with an USBP Honorary Award first, it is ensured that the employee action is recognized and that the recognition is given by the their organization, the U.S. Border Patrol.

Recipients of significant governmental and non-governmental recognitions may be awarded USBP Honorary Awards.

Distinguishing of Past Acts of Under-Recognized or Unrecognized Heroism, Injuries or Wounds

The tables are to be used as guidelines to assist in identifying appropriate employee recognitions based on the type of accomplishment:
If more than one table may be used to evaluate an employee's accomplishment, the table most advantageous to the employee should be used.

The guidance tables do not address all worthy acts or categories of achievement.  Honorary Awards may be used to recognize employee achievements for a tour of duty, retirement or other commendable situations.

This table is used to determine the appropriate award for an employee performing administrative functions.  A simple matrix evaluating the value of the achievement/accomplishment to the extent of the application identifies the award to which the employee should be nominated.  For example, an employee that creates a "substantial" change to a program that impacts a sector (extended), should be nominated for a USBP Achievement Award.

Lifesavings actions not involving danger to the employee are recognized under Table #4.  Such actions are NOT acts of heroism/valor.  Employees must face danger to receive a valor award.  See the definitions near the bottom of this page.

This table was developed to provide a means to recognized employees for performing their primary function.  Recognitions under this table should be presented in greater numbers than any of the other tables.

In utilizing this table, the nominator would determine the intersection of the employee's actions.  For example, and employee making an "exceptional" "misdemeanor" arrest/seizure should be nominated for the USBP Achievement Award.

An employee’s performance during a lifesavings act is the primary measure to identify the proper award.

Lifesaving actions under this table do not involve danger to the employee. If danger is present, then the action should be considered heroic/valorous and Table #2 used to evaluate the appropriate recognition.

Beyond the call of duty – A voluntary course of action taken in the scope of duty while facing actual or potential danger, the omission of which would not justly subject the employee to censure for failure to meet expectation.  The action usually includes the acceptance of existing danger or extraordinary responsibilities.

Heroism / Valor – The minimum measure of bravery, gallantry or courage by which an employee may be recognized with the U.S. Border Patrol Achievement Award with a “V” device. Heroism is determined based on the level of actual or potential physical risk the employee faced in relation to their level of performance while in the scope of duty.  Responding in the face of perceived danger does not qualify as heroism / valor.

Extraordinary Heroism / Valor - The minimum measure of bravery, gallantry or courage by which an employee may be recognized with the U.S. Border Patrol Commendation Award with a “V” device. Extraordinary heroism is determined based on the level of actual or potential physical risk the employee faced in relation to their level of performance while in the scope of duty. Responding in the face of perceived danger does not qualify as heroism / valor.

Conspicuous Heroism / Valor - The measure of bravery, gallantry or courage by which an employee may be recognized with the Newton-Azrak Award. Conspicuous heroism is an action taken by an employee while facing grave danger, performing above the call of duty and in the scope of duty.

Line of Duty - Any action that an employee is obligated or authorized by law, rule, regulation, or written condition of employment to perform or for which the employee is compensated by U.S. Customs and Border Protection.
For USBP Supervisors/Managers using a government computer

Check for local SOP's.  I know that ELC has a local SOP.

HOW TO NOMINATE EMPLOYEES FOR HONORARY AWARDS​