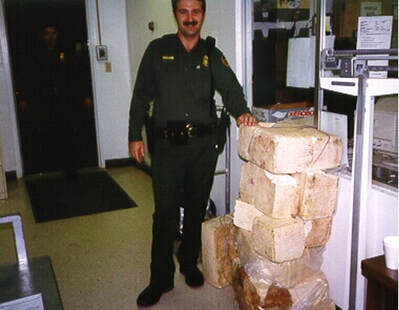 This was late December 1996 in the Brownsville AOR, McAllen Sector. It was a warm night and I was partnered up with Ed S.  We were responsible for the Santa Rosalia area, about four miles east of Brownsville.  Victor T. was assigned the scope truck that night and about 2100 hours he parked the truck at the Impala Ramp.  Ed and I parked out of view near the cemetery and were using our NVG’s to scan the area.  About 2130, Victor called out that he had a group coming up 614 ditch.  He also said that it appears that each of the group of eight was carrying a heavy bundle on his back.

Ed and I were both excited since we had just busted a dope load a few days before.  We setup closer to the ditch where we could cut off the aliens before they hit the river.  There was a small resaca to the left and right of the ditch, which the aliens could hit, but Steve B. and Fernando Q. were supposedly covering the sides.

I could make out six guys with bundles on their back and watched them heading up the ditch through the NVG’s.  They were headed directly for the Impala ramp where Victor and several agents were waiting.  Victor called out the bundles must be pretty heavy since several of the aliens were struggling with them.  A few minutes latter, Victor called out that one of the aliens had fallen down and the others were checking him out.  He told the agents to hit the trail and we started running up the trail.  We could hear the brush breaking and several splashes into the resaca.  As we came up the trail towards the Impala ramp, we noticed several large, white squares.  I assumed that these were concrete blocks, since there had been some construction in the area.

All of a sudden, I could hear Lupe S. yell out, “It’s Cheese Vato!”   The blocks we had passed were blocks of cheese.

We searched the area and found 450 pounds of white cheese.  Everyone was laughing since we all thought that it was a dope load.  No aliens were apprehended since the agents hitting the area were only interested in the “contraband”. Once everyone knew it was cheese, no one wanted to go into the bug and snake infested resaca to search.