This page is a near duplicate of U.S. Customs and Border Protection's page - The U.S. Border Patrol's Early Rank and Time-in-Service Insignia.  It has been repeated here in the event that CBP removes the page so that the information is not lost.
Help spread the word!
It is important to know the Immigration Service hierarchy of the 1920's to understand the early rank insignia of the Border Patrol.  The Border Patrol was created in 1924 under the Department of Labor, becoming part of the Bureau of Immigration.  The Bureau was led by the Commissioner-General.  Under the Bureau was the Immigration Service.  The Immigration Service divided the United States into 35 immigration districts.  Each district was led by a District Director or a Commissioner of Immigration.  If a district had more personnel or a greater workload, then its leader would receive greater compensation and be given the title of Commissioner of Immigration.  Most districts were divided into three to five sub-districts.  In 1924, eleven districts and their 32 sub-districts were located along the international boundaries with Canada and Mexico and received new Border Patrol employees.  Throughout the decades, the sub-districts would evolve to become the modern day U.S. Border Patrol (USBP) Sectors.  Therefore, the USBP began not with two but with 32 "Sectors." 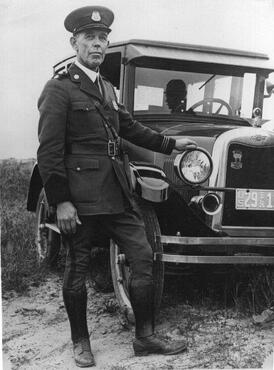 ​General Order 42 was a very short document and was modified with at least 10 amendments.   Amendments six through ten have been located.  The sixth supplement to General Order 42, dated April 4, 1928, contains the earliest Border Patrol rank and time-in-service insignia that have been located.  Furthermore, based on a report written by Supervisor of the Border Patrol Ruel Davenport, the USBP had no rank insignia as of October 1927.  Therefore, it is reasonable to conclude that pictures containing rank insignia before the sixth supplement to General Order 42 were unofficial, local insignia.  This is the case with an early picture of Frank M. McMahan, who was first PIIC of the Escondido Sub-district in 1924 and later became the Chief Patrol Inspector of the San Diego Sub-district in 1926.

Please send comments and questions to cliff@honorfirst.com.
All HonorFirst.com web pages and documents are copyright 2017 - 2021 by Ray Harris.  All rights reserved.
DISCLAIMER:
​HonorFirst.com is in no way affiliated with the Department of Homeland Security,
Customs and Border Protection, or the US Border Patrol.
The US Border Patrol is an equal opportunity employer.